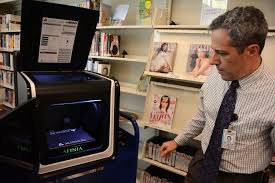 Often, we think of the public library as the repository of legacy technology, going back to Gutenberg, “dead tree” books, and the printing press. But printing is in the forefront of modern techno wizardry, and in March, the Collier County Public Library system held a series of classes to help people get up to speed on 3-D printing.

“I’m an expert as of last Wednesday,” said David Chalick, branch manager of the Golden Gate and Golden Gate Estates libraries, standing in front of a group of about 20 people who had come to the Golden Gate library branch for the class. Titled “Introduction to 3-D Printers,” the session was designed to explore a manufacturing technique that, while still in its infancy today, holds vast implications for how all sorts of things will be produced in the world of tomorrow.

“We’re borrowing this printer for two weeks from the Southwest Florida Library Network,” said Chalick. “We’ve been trying it out, and so far it has worked pretty well.”

He and library assistant Spencer Sneed showed the class some of the objects they had printed, on an Afinia machine Chalick described as a “hobbyist or home-use model,” interfaced to a PC laptop. They displayed a miniature red plastic rosebud, a clockwork heart with parts that rotated into and out of shape in the manner of a Rubik’s Cube, and a garish red skull perfect for your next Halloween party. All the objects were assembled from spools of plastic cord similar to fishing leader.

“Any shape, any geometry you can imagine, you can make,” said Chalick — once you have digitized the dimensions and converted them into a three-dimensional algorithm. This is an example of where the math classes we are always told are crucial to maintaining the U.S. lead in technology are key. Luckily, it is not necessary to create the code from scratch; the Internet abounds with downloadable software to help create objects with your 3-D printer, and templates for “off the shelf” projects to plug in and print out.

The technology has already been used to create engine parts, medical devices including prosthetic limbs, edible food items, and even body parts made from living tissue. In the most infamous use of 3-D printing, it has been used to produce a gun capable of firing lethal bullets, also printed out from the 3-D printer. NASA commissioned a special 3-D printer designed to work in zero gravity, which was delivered to the International Space Station in December 2014, and used to build a particular wrench needed for a repair operation aboard the spaceship.

In the future, there is no way to know what will be created when a 3-D printer is turned on.

“It’s the convergence of artificial intelligence or AI, robotics, infinite computing and digital sensors,” said Chalick. “This is going to threaten all existing business models.”

Futurists such as Jeremy Rifkin have called 3-D printing the “third industrial revolution,” a game-changer comparable to and taking the place of the assembly line production manufacturing that dominated industry starting 100 years ago. Also called “additive manufacturing,” the expectation is that using as yet undeveloped “elemental inks,” the technology will make it possible to print virtually anything, with what will function on a molecular level as any chosen material.

The machine demonstrated at the Golden Gate library is not up to that level yet, but is pointing the way, and some of those who came to the class have already purchased their own 3-D printers and are putting them to a variety of uses.

“I call this playing,” said Jim Carroll, a GE retiree who described himself as an expert in Tinkercad, one of the software programs designed to facilitate creating three-dimensional objects. Jerry Lastella, another who showed up for the talk, is actually producing a fishing device he calls “The Threader” using his 3-D printer, and selling them online and in local stores.

Malcolm and Edythe Newbourne of Marco Island, sitting in the front row, have experimented with a version that uses metal powder, and can heat sand hot enough to fuse it into glass.

“My dentist in Boston makes crowns in his office,” said Malcolm.

Chalick had previously done one class for schoolchildren, and was scheduled to hold another at the Golden Gate Estates library branch. Then, the 3-D printer, like a borrowed library book, has to be returned — but the technology is not going away.

Originally Published in the Collier Citizen